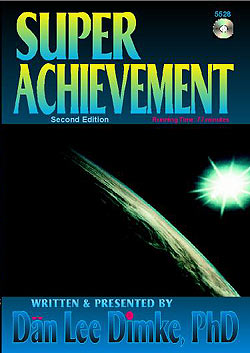 You Can Achieve More in the Next 5 Years than You've Accomplished Since You Were Born!

The truth is, most people have no idea of what they are really capable of. Yet, becoming a successful, super-achiever, is easier than it looks ..... a lot easier.

Earning 100 times the average income, and having all the extravagant luxuries that go with such a life-style doesn't mean that you need to work 100 times harder than you do now - not at all.A million-dollar race horse isn't 100 times faster than a 10,000-dollar race horse. Running the track just a few fractions of a second faster than the other horses is all that it takes to consistently win races and large purses, and become a million-dollar horse.

Interestingly, the same standards apply to humans. Most successful people agree that the work is only slightly more demanding than it was to simply be average. Working and thinking just a little faster than others, learning to become more efficient, and always being just a little better prepared than those around you can make all the difference.

But, even more fascinating, it is not the wealth itself, but the feeling of self-worth that most "super-achievers" consider the real reward of striving to reach one's full potential. It can lead you to discoveries about yourself and your capabilities that you might otherwise have gone to your grave without ever realizing.

Super Achievement unlocks the secrets of the world's most successful people and reveals the formulas they use to multiply their value to themselves and to others by getting more done in less time.

You'll learn how to smash through the physical and mental barriers others set in front of you as if they weren't even there. Once you've conditioned your mind to focus on getting things done, you’ll be able to reclassify the self-limiting labels that ordinary people attach to projects.

Words such as impossible, mean that a particular project may just take a little longer to accomplish. Instead of backing away, as others invariably do in such a situation, you just schedule a little extra time, and be sure that you've sought out the top advisors who will help you tackle the problem with clear thinking and the most knowledgeable interpretation of the facts.

Learn the secrets of the "super-achievers", and you can become one of them. Not, just for the wealth, or the power, or the prestige that results, but for the chance to become the total person you've always secretly wanted to be.