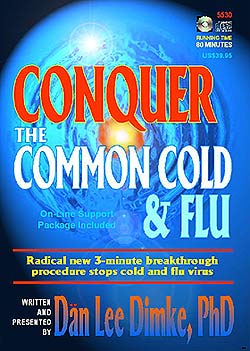 Also available in other formats (below).

FEBRUARY 2020 UPDATE: Due to the current coronavirus (SARS-CoV-2) outbreak and the resulting Covid-19 global pandemic, I have released a free You Tube video that presents the core procedure originally described in Conquer the Common Cold and Flu so that everyone can have access to this potentially life-saving prevention and treatment without the need to purchase anything. The free video also includes more recent data than the audio book and has been optimized for coronavirus based on the most recent data available as of Feb, 20, 2020. Here is the link to a page with links to several versions of the video Stop COVID-19 Now!

CAUTION: This procedure presented in this video is NOT a cure for coronavirus! It has not yet been endorsed by any health authority. It should be ONLY be considered as one more layer of prevention IN ADDITION TO ALL OTHER PRECAUTIONS recommended by the CDC, WHO, or other health authorities - including hand washing, social distancing, coughing and sneezing into a sleeve, avoiding contact with others who display symptoms, getting tested for COVID-19 if fever and other respiratory symptoms develop, and seeking immediate medical advice if tested positive for COVID-19, or if symptoms persist or worsen. NOTE: Once the virus has migrated to the lungs, which may occur in up to 20% of patients within one to two weeks, the virus is too far from the external heat source to be substantially impacted by inhaling hot air. Benefits are likely to be highest when used for prevention and early treatment.

MAY 2009 UPDATE:”Though not yet confirmed in clinical trials, initial indications suggest that the H1N1 Flu Virus (Originally referred to in the media as “Spring 2009 Swine Flu”) is a type of virus that has the potential to respond to the ColdARREST™ procedure to significantly reduce or eliminate symptoms, particularly if used preventively, or at the earliest signs of illness.”

"I have not suffered from a cold in the past five years since I have been using the procedure described by Dr. Dän Lee Dimke."-Chris Vermeulen, Johannesburg , South Africa

Read More about Chris' Experience with Conquer the Common Cold

The common cold is the most widespread and prevalent of all human diseases, striking as many as 200 times in the average lifetime. Colds often last from four days to two weeks bringing the more than twenty miserable symptoms we've come to associate with colds and flu.

Traditionally, there has been no cure or prevention for this disease. However, exciting, new, scientific evidence, resulting from an accident during research with polio virus, has suggested a simple, yet effective, procedure that anyone can use to actually destroy invading cold virus, for the first time.

The ColdARREST™ procedure works almost immediately. The result is incredibly rapid and lasting relief from cold symptoms. And, instead of merely masking symptoms, this procedure helps stimulate recovery from the disease, beginning just as soon as symptoms disappear. A revolutionary, new, cold-prevention system is also presented.

Children routinely catch three times as many colds as adults. Yet, with parental supervision, the ColdARREST™ Procedure is safe enough and gentle enough for a child to use, and just as effective.

For the benefit of physicians, chiropractors, and other medical professionals, a detailed bibliography of the extensive medical and biophysical research behind the procedure is also included in standard Index Medicus format.

"After listening to the audio program, I am now armed to put the cure into action the instant I need it. I recommend everyone try the methods in Conquer the Common Cold."

The following is excerpted from a February 24, 2003 Press Release from the University of Michigan Health Systems, Ann Arbor, MI -

Catching a cold isn't cheap. A study published in the February 24th edition of Archives of Internal Medicine reports that the cost to the U.S. economy is $40 billion a year - substantially more than other conditions such as asthma, heart failure and emphysema.

"A cold is the most commonly occurring illness in humans, so it was no surprise that there are approximately 500 million colds each year in the U.S.," says Mark Fendrick, M.D., lead author on the paper and codirector of the Consortium for Health Outcomes, Innovation, Cost Effectiveness Studies (CHOICES) at UMHS. "What was a surprise is how often the public uses the health care system to treat a cold."

"The public doesn't usually consider the costs associated with missing a day of work due to illness or having to stay home to take care of a sick child", says Dr. Fendrick "Not surprisingly, lost work drives most of the cost."

The study found that Americans spend $2.9 billion on over-the-counter drugs and another $400 million on prescription medicines for symptomatic relief. Additionally, more than $1.1 billion are spent annually on the estimated 41 million antibiotic prescriptions for cold sufferers, even though antibiotics have no effect on a viral illness.

"We found that the common cold leads to more than 100 million physician visits annually at a conservative cost estimate of $7.7 billion per year," Fendrick says. "More than one third of patients who saw a doctor received an antibiotic prescription. While these unnecessary costs are problematic, what is more concerning is how these treatment patterns contribute to the development of antibiotic resistance, a significant public health concern."

The study reports that an estimated 189 million school days (an average of nearly 1 day per episode) are missed annually due to a cold. As a result, parents missed 126 million workdays in order to stay home to care for their child. When added to the workdays missed by employees suffering from a cold, the total economic impact of cold-related work loss exceeds $20 billion.

* If you use the simple ColdARREST™ procedure, as described in this presentation, during the next cold season this fall and winter, (The difference between summer and winter colds is explained in the audio program) and you do not have less colds and/or drastically reduced symptoms, simply document your usage and symptoms and return the program for a complete refund.

The ColdARREST™ Procedure, seems to be equally effective in helping to prevent nearly all types of heat sensitive, common cold-causing viruses, including the entire coronavirus family discovered prior to the current SARS-CoV-2 virus that causes COVID-19. We have not yet received any testimonials from patients who were confirmed to be COVID-19 positive. While all available evidence suggests that the current coronavirus appears to the share same heat-sensitivity demonstrated by others in this virus family, only a number of confirmed, rapid recoveries will begin to offer evidence of the potential effectiveness of the Cold-Arrest™ Procedure in helping to accelerate reversal of infection.
Should you elect to try this procedure yourself, remember to follow all procedures exactly as presented, using only the suggested heat sources. (Steam is NOT one of them). DO NOT use excessive levels of heat that cause ANY level of discomfort. DO NOT use older (pre-1990) external heat devices that are not equipped with a Ground-Fault Interrupt Circuit designed to prevent electric shock. Spray with distilled or previously-boiled water at room temperature whenever possible. Follow ALL manufacturer-recommended precautions for sauna use and begin with only 3 to 5-minute sessions. Increase gradually. Avoid sauna use entirely, if you are consuming alcohol, or have a fever or high blood pressure. And, consult your doctor, before using a sauna, if you are being treated for any medical condition or currently taking prescription medications. Safety first!

Since “Conquer the Common Cold and Flu” was originally written and produced, more than 30 years ago, we’ve learned considerably more about a particular class of common-cold-producing viruses, namely coronaviruses. While they were once relatively benign and appeared to live and reproduce only within the epithelial cells that line the sinuses, the SARS-CoV coronavirus and the current SARS-CoV-2 coronavirus (Severe Acute Respiratory Syndrome), that causes Covid-19, have, as their official title suggests, grown considerably more deadly than they were known to be in the mid 1980’s.

Most coronaviruses still predominantly live and replicate in the sinuses. But, as were have more recently learned, both SARS-CoV and SARS-CoV-2 (the virus that causes Covid-19) have been found to be able to move beyond the sinuses and migrate down the trachea to the lungs by slowly, but progressively attacking adjoining epithelial cells along this path. This appears to occur only in a small percentage of patients. In even fewer instances, coronaviruses may even spread to other organs of the body including the digestive tract and liver. This appears to occur only in very elderly and immune-compromised patients who may also have one or more underlying medical conditions, or patients who are taking immune-system-suppressing drugs. But, because we now know that it is possible for this to occur, it is important that it be noted, here.